I nearly fell over when I saw the latest Kashi commercial touting it's cereal as having as much protein as an egg. Oh man, they've sunk to a new low if they think that their cereal can hold a candle to a whole food from nature. I have to re-paint this nutritional picture for you in an appropriate manner before this nasty rumor about cereal being anywhere near as good for you as an egg perpetuates further. 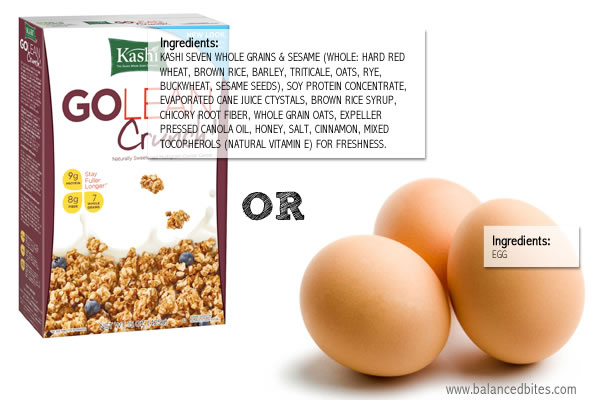 Take a few moments to just THINK about this:

1. Cereal is a processed food. An egg is a whole food.

In case you haven't been reading this blog for very long, we ALWAYS eat whole foods over processed foods. Period. I really was laughing at this commercial and talking back to the television asking, “then why don't people just eat eggs?!” (Barring allergies, of course!) Oh, that's right, we've been SCARED away from this delicious, whole, nutrient-dense food by our government's nutritionists and dietitians who bought into the notion that fat was going to kill us. Well, guess what everyone, it turns out that it's not the naturally occurring fats (see my post on fats here) in things like eggs that's sending us to an early grave. Quite the contrary, if we ate more eggs, we'd not only be healthier from the nutrition they provide, but we'd likely eat far less of the sugar laden-crap called cereal. That's right, cereal is crap. Crap that lines grocery store shelves in beautiful, brightly colored, healthy-looking packages. Shoot, eggs come in boring, beige cardboard cartons. I have earned the right to rant like this because I not only ate my way through the cereal aisle hundreds of times in my day, but I've now studied nutrition long enough to know better.

2. Cereal, and especially this “healthy” Kashi cereal, is loaded with sugar. An egg has no sugar. We all remember the dish on sugar, don't we? Check out that ingredients list on the Kashi cereal. There are THREE different sweetners in there:

In case anyone was wondering how cereal companies get their grains to taste like something better than the cardboard box, it's by adding SUGAR! Have you ever seen a box of “All Bran Cereal?” Yeah, there's high fructose corn syrup in that one. One serving of Kashi Go Lean Crunch cereal contains more than 3 Teaspoons of pure sugar. And, that 37g of total Carbs will do a great number on your blood sugar, especially when paired with skim milk.

This is to say NOTHING of the canola oil or the “whole grains are healthy” claim that's just about permeated every single American household to the tune of Poptarts “made with whole grains.” I kid you not. Come on, people, are we really that naive?

For more on the deception that's happening out there in the world of American nutrition, check out this article that was published recently in the Huffington Post by Justin Stoneman, “America: A Big, Fat, Stupid Nation” and my post on the USDA Food Guide Pyramid entitled “We've Been Fed a Pyramid Built of Processed Food Bricks.”

I'll get around to my own post on this sooner or later, but for more information on why grains aren't all they're cracked up to be (whole, half, or otherwise) check out one or both of Robb Wolf's articles:
“Damn Dirty Grains: This Time It's Personal,” or
“How to Keep Feces Out of Your Bloodstream (or lose 10 pounds in 14 days).”