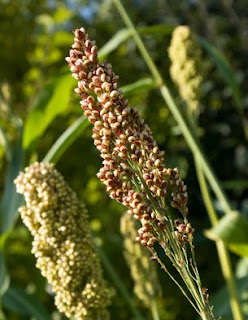 Quinoa. It's pronounced keen-wa.
Not kin-oh-ah. Keen-wa. It's kind of fun to say, isn't it? Well, it's easy to make and fantastic to eat. It's versatile, hearty and tasty. And guess what? It's gluten free!

Unlike it's aesthetic fraternal twin, couscous, which is made from wheat and is actually a tiny pasta, quinoa is a seed! It can be soaked and cooked much like other grains we find in our supermarkets and health food stores today. It comes in three colors (to my knowledge): tan, red and black. Tan is the easiest to find, followed by the red. Black quinoa is something I've been able to find at my local organic grocery co-op, though I haven't heard of people finding it too easily elsewhere.

There is conflicting information out there about whether or not quinoa is a complete protein. Some sources claim it contains all 9 essential amino acids for it to qualify, while some say it has just 8. Either way, it's a great source of healthy fats, whole grain fiber, phosphorous, magnesium and iron.

According to the Wikipedia entry on quinoa: 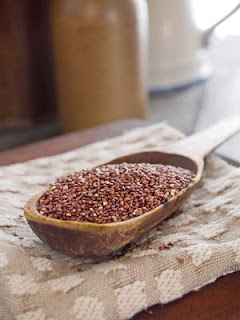 Quinoa…a species of goosefoot (Chenopodium), is a grain-like crop grown primarily for its edible seeds. It is a pseudocereal rather than a true cereal, or grain, as it is not a grass. As a chenopod, quinoa is closely related to species such as beets, spinach and tumbleweeds. Its leaves are also eaten as a leaf vegetable, much like amaranth, but the commercial availability of quinoa greens is currently limited.

Quinoa may be germinated in its raw form to boost its nutritional value. Germination activates its natural enzymes and multiplies its vitamin content.[5] In fact, quinoa has a notably short germination period: Only 2–4 hours resting in a glass of clean water is enough to make it sprout and release gases, as opposed to, e.g., 12 hours overnight with wheat. This process, besides its nutritional enhancements, softens the grains, making them suitable to be added to salads and other cold foods. 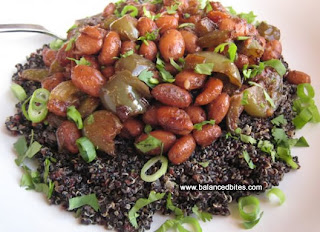 What I love most about quinoa is how versatile it is. You can make it completely plain by cooking it in water, or make it savory by cooking it in vegetable or chicken stock. You can even cook it in nut milk or almond milk and prepare it for a sweeter dish or for breakfast! Be on the lookout for more quinoa recipes in the future, but for now, I'll give you the basics on cooking quinoa. Personally, I tend to make it far more often than I make rice since I can't really mess up cooking quinoa, and it's higher in nutrients. (pictured right: pinto beans cooked with green olives over black quinoa)

Here are a few ideas of dishes I make with quinoa: a quick salad of avocado, tomato and quinoa dressed with a squeeze of lime and cilantro, quinoa in place of rice or pasta under beans, meat or seafood, coconut quinoa with walnuts and cranberries for breakfast. I've even made quinoa “cakes” or little patties that I've toasted up similarly to potato pancakes, it's so versatile! Maybe search the web for some recipes that look interesting to you and get cracking to try some quinoa tonight! 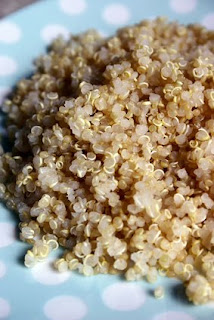 Rinse quinoa in a fine mesh strainer for a minute or so.

Place rinsed quinoa into liquid in a pot on high heat. Allow the liquid to come to a boil. Once the liquid is boiling, reduce to a low simmer, leaving the lid on to allow the liquid to absorb into the quinoa. This will take approximately 20 minutes, but if you leave it longer on the stove, simply turn off the heat and it won't overcook.

The quinoa is done when all of the liquid is absorbed and the seeds are sprouted. You'll see the tiny white germ ring popped out of the seeds.

You can store the quinoa for about 3-5 days in your refrigerator and use it a bit at a time.

To find out more about going gluten free, or for any other information on holistic lifestyle coaching and nutrition education, contact me today for a free consultation.