Keeping the motivation for your healthy diet and lifestyle can seem nearly impossible when you're faced with plate after plate of baked, sticky, cheesy, gooey, sugary, gluten-laden treats. That's pretty much what they all are: treats. They're not really FOOD. I mean, we all know this, but why is it so hard to resist when the time comes?

I can tell you one thing for sure: I plan on staying on track with the plan I'm on this Christmas and New Year's. Last year, I didn't. I did not have the correct mindset prepared going into the holidays last year, but this year, things are different. I want to share with you all how I talk to myself and how I think before entering a situation where I KNOW I'll be faced with a lot of choices that I want to avoid. 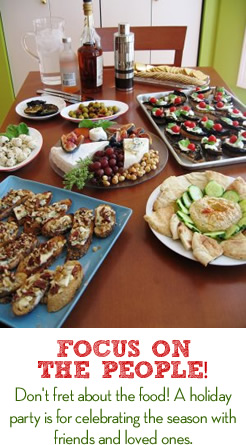 1. Repeat after me: “I have a goal, and until I reach that goal, EVERY DAY COUNTS.”
I know this seems silly, but it's VERY true. If you're already in a place where you've reached your goal, well maybe you've got some leeway here. Maybe you can sneak a few extra bites of some treats you know aren't the best for you, but you'll bounce back the next day and be right back on track- no harm, no foul. BUT, if you're still working towards a goal, EVERY DAY COUNTS. That said, even once you reach your goal, it's not a reason to go crazy or forget how you got there! Clearly you want to maintain your path and keep focused on how you feel every day. Let's keep our head on here, people.

2. The treats will exist, even after that day (or holiday) passes.

This is a good one for ANY event that comes up where treats are presented, but you're working HARD to avoid them. Consider this: the world in which we live today presents us with nearly unlimited access to any food, any time we want it. That is amazing. It's also pretty sad. But barring an extreme Easter-time Cadbury egg craving (Oh, you didn't know those existed? Yes, they do. I have had them.), ANYTHING you see on a holiday party or meal table is accessible to you any time you may want it. So, if you're working on a goal, and it's not part of your plan right now to partake in those treats, LET THEM GO. They will be there for you on the other side. It's not depravation if they're going to make you feel badly after you eat them. I promise. Which leads me to my next point.

3. The POSITIVE feeling you will have by NOT partaking in a treat will FAR EXCEED the few seconds of potential pleasure to your palate.
I know, I know… you think I'm crazy now. But seriously, I have gone through this for years! I have gone back and forth between keeping myself on the straight and narrow and dabbling in things I know I shouldn't eat. And I can tell you from experience that I have NEVER ONCE felt like it was worth it. Most of the time, the treat didn't even taste as good in reality as it did in my imagination before I took a bite. And after, I almost always felt worse – both physically AND emotionally. The sugar I probably just ate jacked around with my energy and mood, and the guilt I felt for knowingly doing that to my body and not just holding my ground added insult to injury. Learn from my mistake.  Or, better yet…

4. Learn from your mistakes.

How did you feel after you ate whatever it was that you just HAD to have? Did it taste as good as you thought it would? As you wanted it to? As you expected it to? How does your body feel after? Are you running to the bathroom later that day? Are you bloated, gassy, moody, tired? Or, do you feel fantastic? Look, I can't tell you for sure what you need to avoid 100% of the time vs maybe just 80% of the time (though I typically do ask people to avoid gluten 100% of the time!), but YOU KNOW how you feel when you stray. Feel it. Experience it. Learn from it. The last time I ate pizza was January 2010. That was nearly a year ago. I felt it, I experienced it and I learned from it. I learned that I not only felt physically awful after it was done, but I felt so emotionally defeated that I knew that any time I would face a pizza craving in the future that I would need to tackle it a different way…

5. Stop, think, then choose.
Understand what is going on when you are about to pop whatever it is into your mouth. Do you REALLY want to eat it? Or are you just going with the flow of those around you and being a bit mindless? Look, I'm not trying to help create a pack of crazy people who freak out at parties because they can't eat anything and everyone points, stares or, even worse, asks why you're not eating anything. Which leads me to the next point…

I can't emphasize this one enough. There is no excuse for ending up at a party feeling hungry and having nothing to eat. You always have a choice. You can either eat something ahead or time and just not show up hungry, or… BRING SOMETHING! Please! By now you've likely mastered at least a handful of dishes and, chances are, everyone at the party or event will love whatever it is that you make. Seriously, you'd be surprised at how fast I've seen Brussels sprouts cooked with bacon,  a colorful kale salad or guacamole and carrot slices fly off of a gluten-minefield buffet table. People do like real, fresh food, they're usually just not accustomed to making it to bring to a party. Set the pace. In fact…

7. Recruit a friend.
If you're heading to a party or event, there's likely at least one other person going as well with whom you can chat beforehand to ask to also bring something that's amenable to your plan. I've recently done this, and my friend (who happens to be mostly gluten-free and sometimes dairy-free as well) was more than happy to oblige. As it turns out, she would probably have made something I would eat anyway, but asking ahead of time doesn't hurt! And if you have no allies in this feat, well, then make two dishes and bring them both!

8. It's easier to stop if you never start.

Look, I KNOW what it's like to peer down at a table filled with treats and feel like all you want to do is dive in, head first. I have been there. Heck, I may be there again in a few days. But, what I know works the best (at least for myself) is that if I NEVER start, I don't have to stress over stopping. Seriously. Somehow it seems that if I don't even have one bite, I can maintain that ever evasive little thing called willpower. We're fighting an uphill battle there as we're wired-up to want sweet things. The thing is, I have gone through this battle SO many times, and I can predict the outcome. If I concede, I'll be cranky, moody, tired and disappointed in myself. Knowing how the battle will end is fantastic arsenal.

9. What if you simply can't contain yourself?
My advice here is that if you maintain a gluten-free diet regularly, to stick to that at a minimum. Time after time, gluten ends up being the biggest “bomb” to the system of someone who has been eating well and avoiding processed foods for a long time. It can wreck your digestion and can really bump you off track for a while. It can even cause a hangover feeling if you're very sensitive. If you are craving something and want to indulge a little bit, then take a small serving of something and walk away from the rest. Maybe try some dark chocolate or, if you tolerate it well, a little bit of some very good quality ice cream or gelato. I promise you that you'll be happier than if you ate a cookie or some cake. The physiological response in your body to something like gluten can be a REALLY tough one to stop- hence why eating just one cookie, brownie or bite of pasta is nearly impossible.

10. If you go off track for one meal or one day, snap out of it the next morning with a fantastic breakfast.This is one approach I take if I get off track. I don't beat myself up for it, and I don't harp on it, dwell on it, or let it define my success or failure. I LET IT GO! It has already happened and there's no sense in living in the past. Be present, live now and make a better choice next time. You will see results as an accumulation of your habits, not as an after-effect of one meal that wasn't perfect. That said, do not let that one meal ruin you for any longer than it should. If it happens, let it be isolated. Reflect on it or perhaps take notes on what you ate and how you felt as a result. Then just move forward with your plan and tackle each day with vigor as you repeat to yourself “EVERY DAY COUNTS!”

What tips do you have for others to help them get through the holidays while keeping themselves on a healthy track? Share them with us in comments!